LIVE YOUR LIFE: Operation Northwoods: According to secret and long-hidden documents, the Joint Chiefs of Staff drew up and approved plans for what may be the most corrupt pl...

BLOG ABG
Posted by MELAYU BUGIS SEMALAYSIA at 00:38 No comments:

Was Morsi / Ikhwan A Tool Of The CIA & Israel?


Here is something from here. It was written BEFORE Morsi was kicked out of power by pro democratic forces.

President Mursi has succumbed to US-Saudi pressure and joined the crusade in Syria. Since becoming president, he has badly mishandled Egypt’s affairs and with a bankrupt economy, he has embarked on a policy that will have serious repercussions for the country’s future.

In recent days, many observers have found Egyptian President Mohamed Mursi’s behavior quite erratic. Whether this is forced upon him by circumstances and/or powers that be or reflect his own thinking is difficult to tell but instead of showing leadership he has succumbed to the forces of darkness that are leading him down a blind alley.

His latest antics come amid shrill calls from the US and its Western allies to devise plans to send heavy weapons to the mercenaries in Syria that have already caused havoc in the country. 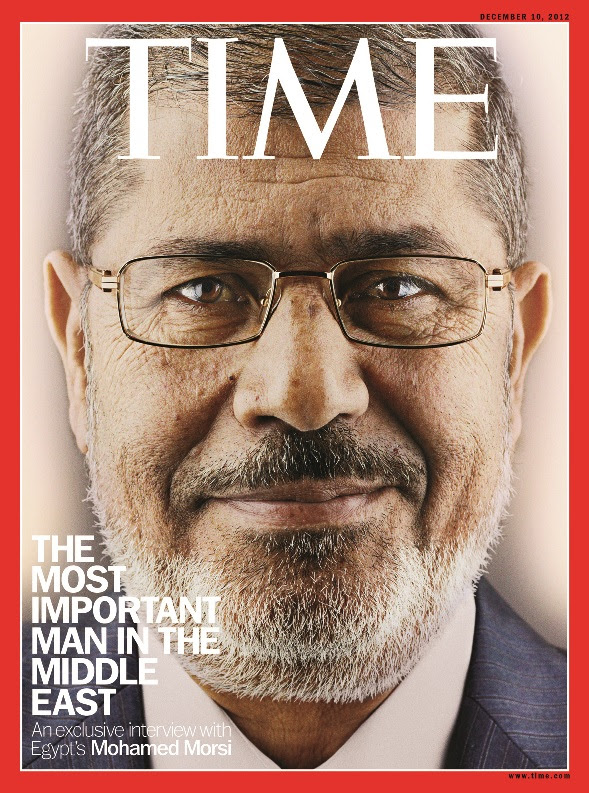 On June 13, President Barack Obama alleged that the Syrian government was guilty of using “chemical weapons” — Obama’s red line — and that he was authorizing the Central Intelligence Agency (CIA) to arrange for arms shipments to the rebels. The same day, a conference of some 70 religious scholars was held in Cairo, Egypt. Was it a coincidence or choreographed to provide an Islamic crutch to what is a Western crusade against another Muslim country? Convened by the International Union of Muslim Scholars, a body headed by Shaykh Yusuf al-Qaradawi and generously funded by Qatar and Saudi Arabia, it was attended by some 70 court ‘ulama from Saudi Arabia and the Persian Gulf monarchies. These so-called ‘ulama have never had the tawfiq to utter one word of condemnation against Zionist crimes inflicted on the long-suffering Palestinians but they waxed eloquent in support of the Syrian people and the mercenaries fighting there.

The conference attendees were shown a crude video, most probably doctored, to highlight “crimes” perpetrated by the Syrian army against the people. Even if true, there is no shortage of crimes being perpetrated by both sides in Syria. Recently a horrible video appeared on YouTube, uploaded by the rebels, in which one of the Saudi-Zionist-American-backed mercenaries ripped open the body of a dead Syrian soldier and chewed upon his liver. Even Russian President Vladimir Putin was so appalled by this that he publicly chastised British Prime Minister David Cameron at a June 16 press conference in London telling him, “Do you want to arm people that eat their enemies’ organs?” Cameron offered the lame excuse, “Not all of them do it.” How many cannibals would it take for the West and their Arabian puppets to stop arming such beasts?

The website for Shaykh al-Qaradawi’s organization ran a statement claiming the Cairo meeting was designed to “show the real face of Iran, the Asad regime and Hizbullah,” in reference to the allegation that Islamic Iran and Hizbullah’s backing is keeping Bashar al-Asad’s government in power. There is no proof of Iran’s direct military involvement in Syria although Tehran has made no secret of its political backing for al-Asad as part of the resistance front against Zionist aggression. Hizbullah did support the Syrian army to liberate al-Qusayr in May but that came two years after the mercenaries had occupied the border town and perpetrated terrible crimes against civilians, many of them Lebanese. On the other hand, it is well documented that at least 40,000 mercenaries from 27 countries are operating in Syria. Regimes supporting such mercenaries or allowing them to use their territory to cross into Syria are in clear violation of international law — yes, the one crafted by the West itself that is so often invoked against those that challenge Western hegemony — and thus are perpetrating war crimes. Such violations, however, have not bothered the West’s human rights crusaders because they are determined to overthrow al-Asad even if the mercenaries they are supporting indulge in acts of cannibalism. In fact, such acts advance the West’s long-standing agenda to depict Islam in the most negative light. Barring a few exceptions, the overwhelming majority of Muslims worldwide have recoiled in horror at such behavior. It reminds them of the barbaric practice of Abu Sufyan’s wife Hind in the Battle of Uhud when she ripped open the body of Hamzah (ra), the Prophet’s uncle, and chewed upon his liver. Are the mercenaries in Syria any better? More crucially, those backing them are following in the footsteps of Abu Jahal, Abu Lahab, Abu Sufyan and his wife Hind. Back to the days of jahiliyah!

The Cairo conference and those attending it had a nefarious agenda: to stoke sectarian conflict in the Ummah. They declared the anti-government struggle in Syria as “jihad” and urged “Sunni Muslims” from all over the world to join it. But making such declarations at a conference attended by a mere 70 court ‘ulama including the Shaykh of al-Azhar Ahmed al-Tayeb, who is known to be a decent person, would not get much traction; nor would Shaykh al-Qaradawi’s website help advance the cause of the “jihadi mercenaries.” A more direct approach was deemed necessary to reach a wider audience. The next day, on Jumu‘ah, a direct appeal was made to the masses at salat al-jumu‘ah. Saudi preacher Mohammed al-‘Arify used his guest sermon at a central masjid in Cairo to harangue thousands of worshippers to not only support the mercenaries in Syria but to join them by enlisting in “jihad.” It was al-‘Arify who had earlier issued a call for Muslim girls to join what he referred to as jihad al-munakahah in Syria. What this means is that Muslim girls should go to Syria to service the sexual needs of mercenaries fighting there. Unfortunately some gullible girls from Tunisia and other places have joined what is essentially a prostitution racket to advance the Zionist-imperialist agenda in the region. Worse still, those that call themselves ‘ulama are advocating such conduct.

Even Masjid al-Haram, the sacred House of Allah (swt) in Makkah has not been spared. Sheikh Sa‘ud al-Shuraym, using the minbar of Masjid al-Haram on Jumu‘ah urged Muslims to help the Syrian rebels “by all means” possible. He even broke down while making the appeal, whichwas broadcast live on several Arabian TV channels. How many times has any Saudi preacher made an appeal to help the Palestinians, much less shedding tears for them? Muslims struggling for their legitimate rights elsewhere, in Kashmir or Afghanistan, for instance, should not entertain any illusions that a Saudi preacher would ever pray for them much less ask for material help.

In the desert kingdom, use of the two sacred masjids — Masjid al-Haram and al-Masjid al-Nabawi — or indeed any other masjid, for political sermons is strictly forbidden. Talking rituals is the order of the day. The House of Saud is terrified lest some independent-minded shaykh might emerge and take its members to task for corruption or lewd behavior. Pre-approved khutbahs are handed to them to deliver from all the masjids in the kingdom. The abuse of the minbar to vilify fellow Muslims revives memories of the dark days of the Umayyad rulers when they instituted the policy of cursing Imam ‘Ali (a) and the Prophet’s (pbuh) family, the Ahl al-Bayt (nastaghfir-allah).

After participating in the khutbah crusade, the preachers assembled in Cairo, feasted on rice and lamb, and then rested for a while, as is their wont, before invading the presidential palace to harangue Mursi to join their campaign. Seeing Saudi- and Qatari-backed preachers and smelling riyals, Mursi could not resist the temptation. Egypt is suffering from a severe financial crisis making him vulnerable to petro-dollars and riyals. He succumbs to whoever comes with offers of cash for his cash-strapped country.

After his meeting with the preachers on Friday night, Mursi addressed thousands of supporters in a Cairo stadium the following day for a “Free Syria” rally. Some of the religious preachers from the conference were also present. Mursi announced cutting all relations with Damascus. He said Egypt was closing its embassy and withdrawing its Charge d’Affaires from Damascus while he demanded the Syrian ambassador leave Cairo. Mohamed Seif al-Dawla, a former advisor to Mursi recalled that after Israel attacked Syria in May, he had demanded the closure of the Zionist embassy in Cairo. Instead, Mursi has shut down the Syrian embassy!

Just over a year earlier, Mursi had announced the formation of a four-member Contact Group to resolve the Syrian crisis peacefully. He had made the appeal at the Organization of Islamic Cooperation meeting in Makkah. He reiterated the same call at the Non-Aligned Movement summit in Tehran a couple of weeks later. The quartet, according to Mursi would comprise Egypt, Iran, Turkey and Saudi Arabia. With his support base at home shrinking and under US-Saudi-Qatari pressure, Mursi has abandoned his own plan to resolve the Syrian crisis through dialogue. Instead, he has joined the Anglo-Wahhabi-Zionist-imperialist crusade. He even demanded that a no-fly zone be imposed over Syria in the manner of Libya. Russia has made clear it will not support any such move and would veto any resolution presented in the UN Security Council.

It is depressing to note that those calling themselves ‘ulama resort to tactics that are bound to deepen existing fissures in the Ummah. Exactly a century ago, the British had injected the poison of nationalism to create divisions between the Ottoman Turks and Arabian chiefs. While these tribal chiefs did not get independence, their betrayal led directly to the implantation of the Zionist entity in Palestine. Today, sectarianism is being promoted in order to safeguard the Zionist entity from the growing awareness in the Ummah, especially the Muslim East. The Arabian chiefs will pay a heavy price for such treachery. In any case, their days are numbered and sooner rather than later, they will be consigned to the dustbin of history where they rightly belong
.
source : BLOG OUTSYED THE BOX /http://www.ascertainthetruth.com/att/index.php/al-islam-a-terrorism/intl-qwar-on-terrorq/879-mursi-joins-the-us-zionist-saudi-crusade-in-syria

Pendekar Melayu 2013
Posted by MELAYU BUGIS SEMALAYSIA at 19:53 No comments:

Malay Archipelago 1511
Posted by MELAYU BUGIS SEMALAYSIA at 00:36 No comments:

get this widget here